After reading comments on KPOP stars ‘gummy smiles’ on various forums such as ‘I can’t believe they don’t like gummy smiles…’ and ‘Oh this guy criticized Hyosung’s gummy smile too’ I was like ‘wtf is a gummy smile?’ All I could imagine were little Haribo bears under someones top lip – weird I know.

But it turns out it’s exactly what the name suggests. A ‘gummy’ smile. A smile where you show a lot of your gums. Trust Korea to come up with another name for it. Written in Hangul it’s 거미스마일 (geo-mi seu-ma-il) but apparently it can be referred to as 잇몸웃음 (meaning laughter/laughing gums) or 함박웃음 (meaning toothy smile).

Hyosung from Secret (yep again, she’s got everything baby!) has been known to have a gummy smile. And er unfortunately has been criticized for it. Not too harshly but  apparently she was told that “showing your gums excessively like that can actually be a negative for advertisements’. 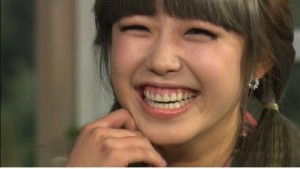 Regarding Korea as a whole, I’m certain that this ‘gummy smile’ business isn’t a massive deal across the public, but in media I suppose it can be treated as a small flaw like having a crooked nose that ‘needs’ to be fixed. To be honest, who really cares about ‘gumminess’. It’s a cute asset. But since the KPOP industry most likely rolls with striving for near perfection, of which a ‘gummy smile’ is not, differences will be pointed out if they don’t fit the set image. It’s not a matter of personal opinion really when it comes to this sort of industry which can be both a good and bad thing.

Anyway HALLELUJAH! The definition of a ‘gummy smile’? Showing lots of gum when you smile, ofttt. And  don’t mean the extra mint type. Laters guys! (: