What Japan finds attractive facially and why

One of the things a lot of girls in particular (although of course this can be applied to guys as well in the exact same way!) think about and consider, when experiencing an interest in Japan, is the cultures general idea of what is desired facially, what sort of looks are considered beautiful or cute.

The obvious ones are;

Why? Because bigger eyes are cuter. Simple. You see a cute puppy and it usually has big puppy eyes! You see big eyes on dolls, you see big eyes in anime. Big eyes = cuteness. One more reason why Japan likes big eyes is because the majority of Japanese people don’t have big eyes. East Asians tend to have mono-lids, some have double lids yes, but the epicanthic fold is typical in a lot of East Asians which can restrict the size or how open the eye can seem. Either way, the Japanese naturally have slightly smaller or thinner looking eyes which is why big eyes are very desirable.

Why? Because on average, the size of a Japanese head is naturally bigger than the size of a westerners head. Don’t ask me the science behind it all I know is that it is just and it is so! I found this out actually by reading a comment by MyHusbandIsJapanese (search Rachel and Jun) on their Facebook page. Apparently Japanese heads are naturally bigger than Western heads and I will link to their page/profile photo to demonstrate here.

Also apparently Asians (Koreans alot of the time, not just Japanese either!) tend to find that they’re cheekbones or faces in general are wider which is why, in a lot of pictures, they’ll do the little cute gestures with their hands by the side of their face. Like THIS: 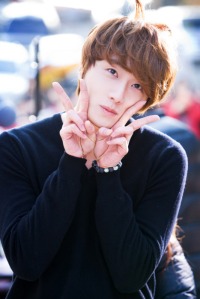 The first picture is of a Japanese girl and the second picture is of a Korean man, if you couldn’t tell. As you can see, Koreans have more concealing-of-the-face-whilst-being-really-cute poses and Japanese tend to just stick with cute. This is most definitely because Korea has a bigger interest in face shapes than Japan.

Why? An Asian nose tends to have a rather flat or dipped nose bridge. Westerners have them too! But it’s very prominent in an Asian nose and is definitely one of the facial features that distinguishes an Asian person from a Western person. The flatter bridge of the Asian nose makes it smaller and shorter, almost as if it starts from the middle of the face below the eyes, giving a button nose effect, whereas a tall western nose appears to start from right between the eyes. I have a very tall nose bridge which, not just according to me but other friends as well, gives me a shark-like-appearance from my profile view. 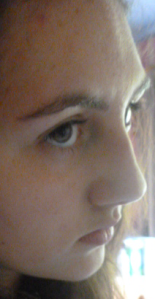 Example of a tall western nose, my own to be exact, my roman nose starts right between my eyes in a way and has little to no dip, arghhh no chance of a cute nose in my case…

Whereas button noses are seen as cute and desirable sometimes in the western world, they are in fact not seen the same way in East Asia. Japan likes tall noses as many East Asian countries do because just like everyone else in the world, they want what they can’t have!

These obvious desirable facial features are pretty much the only desirable facial features. Of course everything is subjective and not every single Japanese person will think the same but in general the majority will consider these features to be attractive. This does not however mean that just because you lack these types of features or if you are Asian yourself that Japanese people are not interested in you. It just means that if you happen to have these features they will be most likely noticed. None of my Japanese friends have the exact same preferences, they all like different things but can appreciate these ‘foundation features’.

I hope I gave you some insight as to why these features are seen as attractive and if you have any questions just let me know! (: