Want to get to know that country more? Ask for a vlog!

Sometimes it can be difficult to get to know Japan or Korea more without actually being there. I mean there’s only so much you can learn through reading online! Even some online bloggers can only show so much of the city they’re in. The purpose of the video may not be to show you the city and even if it is it may be sped up or muted with background music or just a quick flick around a shopping centre nearby or something.

My Korean friend E eventually asked ‘Hey! Can you video your city for me!’ So E and I decided to send each other a vlog of our town/city! I’ve gone round Leeds as I went out with my friend today anyway and I took some footage of us walking round the city centre and in and out of some places we went to find somewhere to eat, we strolled around Trinity and around the side streets whilst I talked through where we were going. I actually had to separate my footage because Leeds was too big to vlog the whole thing from a camera with about 10 minutes of recording left in it but it was enough to capture ALOT. E is sending me some footage of his hometown, which isn’t in Seoul and is in fact quite a small area. I think it’s important to capture life outside of the capital of a country as well. It helps to paint the whole picture. (:

So why not ask your friend to vlog a little bit and send it your way? Of course don’t make friends with someone just for this reason, but if you have a friend who can ask for a couple of minutes. It’s not always necessary to talk, E is too shy to speak English as people will most likely stare since it’s only a small town. But it’s easy for me to, in fact nobody gave a damn in Leeds, people just walked straight past!

SO BOOM! Just a little suggestion. And if I don’t blog tomorrow I hope eveyrone has a FABULOUS New Year and I hope it all goes amazing for you! Mwah! (:

So I’ve been attending Japanese/East Asian talks at different universities to find out which one is right for me and let me tell you IT’S WORTH IT. Teachers drill it into you (at least mine do) how important it is to look round every uni you’re considering  as a lot of the time you’ll be surprised, and they’re right. Uni’s might teach the same subjects but they are definitely taught differently. In my case I was looking for East Asian Studies specifically Japanese AND Korean because I have still yet to decide which I am really set on. I KEEP SWITCHING OKAY! And my personal statement must be done in a couple of weeks…bloody hell.

So my advice, if it wasn’t obvious enough, is to find out the open days of every uni you’re considering and attend.the.relevant.talks. This applies to all subjects, not only EAS, however, since I’m taking EAS I’m going to refer to it throughout this post now. I attended the talks of both Sheffield and Leeds and I’m going to compare them as an example.

Just to make sure before I start, this is my opinion completely, it isn’t a fact and I shouldn’t need to clarify this but of course, on the internet its necessary to avoid misinterpretations SO:

Uni of Sheffield – teaches both Japanese and Korean (both languages can be paired with other subjects) and the talk was a general EAS talk covering Japanese, Korean and Chinese. The head of the Japanese talk and the head of the Korean talk were present at the time of my talk and they were both fantastic! Yep, they had a power point but knew exactly how to ‘work’ it, not relying on it too much at all, they simply used it as a starter for each section and had no problem talking to us, the small group that was there. I believe H.Dobson is the name of the head of the Japanese department and he led the talk – he ran it beautifully, the presentation, the casual way he delivered the talk and the humor as well. It was all fantastic, great content, great answering of queries, great delivery. His co-presenter, the head of the Korean department also delivered her side of the talk very well. It wasn’t split into two parts, but rather they both delivered together which was really efficient. Sheffield sends their EAS students abroad in their 3rd year.

Not one part of this talk bored me and even afterwards they suggested, if people had more questions, that we talk outside as they talk had finished, however unfortunately I had to meet the friend I was with so I didn’t get the chance. They provided us with literature, info about the talk and email addresses for more questions which I made good use of – I enjoyed the talk so much that I even emailed them with my questions and had to mention that I wanted to sit in there all day and talk about the course. Sheffield sold it to me. Just brilliant.

Uni of Leeds – teaches only Japanese and Chinese for EA but again they can be paired with other subjects for dual honours. I have to admit, I was slightly more bored with this talk. It was specifically for Japanese, not any other language and it was run by a foreign European woman and a native Japanese woman. During the talk the European tutor basically read straight off the slide show, all the information was on there and I didn’t particularly find her delivery of the course very engaging. After which the native Japanese tutor explained her part but admitted most of it had been covered. I got the feeling that despite presenting this every year they probably hadn’t been prepared. I felt like Leeds was trying to sell itself a bit too obviously at this point due to the presentation of statistics and there was a lot of commenting on why they thought their system worked best. However I enjoyed myself quite a bit more when a 4th year student came in to talk to us, she was very social and engaging and we clarified a few questions everyone had with her which was very helpful.

It was mentioned that Leeds actually sends students to Japan in their 2nd year unlike a lot of universities who send their students in the 3rd year. This was was because they felt that students benefited a lot from the rapid expansion of vocab and speaking skills picked up abroad which made it easier for students to come back and finish their second half of uni in England. Apparently, it’s easier to work on future preparations and workloads when you do not have reverse culture shock to deal with which is completely true and well said.

I was expecting Leeds to have a really mind-blowing EAS talk but I admittedly I was a little disappointed. Overall, like I said before, I was in love with Sheffield the minute I stepped into that room. The way they presented was just fantastic and its definitely going to be my first choice no matter what whether I take Japanese or Korean.  So as demonstrated in this post, no talk is going to be the same in one uni as it will be in another! Make sure you do your research first! You do not want to be stuck in a uni you hate.

BOOM! Hope this post helped at least a little! And enjoy your open days!

Firstly, just a little update on my life, today we had our exam results day. I got mine and I passed fair and square! Maybe not exactly the results I wanted but this is only year 12, I still have year 13 to improve!  Anyway me and my friend planned to get some friends together and go to YO!Sushi in Leeds to celebrate, but since we all wished our grades were a little higher it turned into a comfort food session. XD

I got my friend to take a few pictures of us at YO!Sushi so you could see what the place is like. Here’s a few snaps:

Here was my first dish. God I love this, I think it’s the Beef&Garlic Teriyaki which is slices of premium beef glazed in garlic teriyaki sauce. I didn’t actually know it contained garlic until I looked at the online menu (to which I’ll post a link at the bottom of this post) but that’s probably what made the glaze on the beef so damn tasty! It’s served with little red chilli pepper slices (not hot at all from what I can remember), spring onions (I think) and a slice of lime that some people squeeze over the meal but I just sucked it…and then convulsed…ahh so sour. But OISHII! 🙂

I also had two other dishes; one was two large piece of sushi rolls and the other was a dessert called Doryaki which was just small little quarter pancakes with a bit of custard filling served with a raspberry sauce pot. 🙂

I also bought a green tea (free refills) for £1.15 (NOT BAD AT ALLLLL!) and then I just had to buy a glass of coke because I needed something cold. 🙂

*our table during the time we were there, got more cramped as the hour went on haha!*

These are just snaps of the little food conveyor belt. So easy to just pluck your food off and eat it nyaha! This is why I love YO!Sushi! 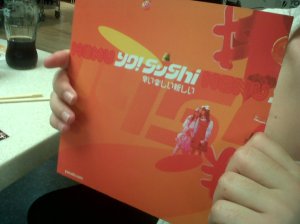 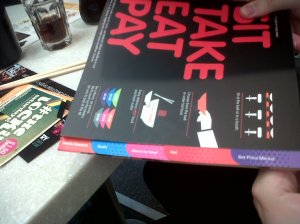 First photo here is of the cover of the YO!Sushi menu you’re given when you eat at the restaurant and the second one is the first page which shows you the different sections of the menu. It’s easy to manoeuvre around and explains everything very simply and easily. Cute! 🙂

Aaaaaand this is us after we’d eaten, clearly a happy bunch o’ squirrels hehee. That’s me doing the peace sign! *Asian style of course, how can you NOT at YO!Sushi?* 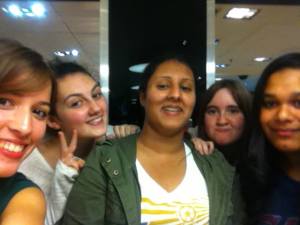 The food was amazing, not expensive whatsoever but extremely filling! The Beef&Garlic Teryaki filled me up really well, I almost thought I couldn’t eat anymore! Had to though, all too good, teehee. If you’re ever in YO!Sushi comment here and tell what you think! I’d love to hear your opinions on my favourite Japanese restaurant. I have yet to go to WAGAMAMA…shhhh…