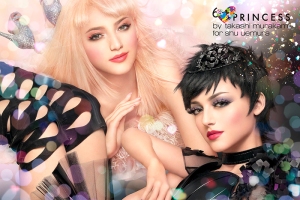 So I was casually chilling with some youtube vids when I came across another advert, this one had me watching from beginning to end. I was initially captured by the unmistakable sound of Vocaloid music which suddenly started playing, then the anime music video that came along with it. At the top it said ‘6♥Princess by Takashi Murakami for Shu Uemura’ and at first I was like ‘Oooh! I like this!!!!!!’ then I was like ‘I don’t get what it’s advertising but I luuurve it!’ and then I was like ‘…what is it advertising though?’

Basically what I saw was an advertisement for a Shu Uemura range. The animation was by Takashi Muakami and the song was ‘Pink or Black’ by Hatsune Miku. They teamed up to produce this advert for the ‘6♥Princess’ range of Shu Uemura! And it’s awesome.

Firstly, listen to this song, in fact watch the advert!

So it took me a bit of thinking and googling to figure this whole thing out because I initially thought the music was composed by Takashi Murakami and the song was called 6♥Princess. I had no idea what the relevance was to Shu Uemura but after a few minutes I’d got it down.

So for those who aren’t aware, Shu Uemura was a Japanese make-up artist and the founder of the Shu Uemura cosmetics line (obviously). Shu Uemura has released a new ‘range’ which is illustrating the ‘pink’ and ‘black’ sides of a girl (hence the pink or black song). So the innocent vs sexy sort of thing which I think is really cute!

Takashi Murakami is an artist, not a music composer as I assumed, so he provided the sweet animation and Hatsune Miku sings ‘Pink or Black’ – together they produced an advert for the new range. 6♥Princess is supposedly the name for the animation by Takashi Muakami – ‘Princess’ referring to the pink princess and the black princess of the two looks you can achieve from the makeup range.

I showed my sister this concept and she just thought it was so sweet, I personally really like it too! There’s more info about the range and the background behind it on the Shu Uemura website.

About the song itself, well, it’s on my iPod constantly! What I really like as well was the fact that it’s sung in English to appeal to a global market rather than simply just Japanese customers. It’s funny because I didn’t realize at first due to the cute Engrish but made the connection when I saw the subtitles. It kind of works as a cute singalong advert! In relation to the anime, it’s gorge. I love the constant comparisons between the pink and black princesses even when they’re dressed in simple school uniforms. It’s really easy to understand the concept behind the advert even if the English is a tad off, but I think it just prompts you to pay even more attention to the advert. If the English was perfect in writing and vocally we wouldn’t watch the video. I have to say I also love the use of the piano throughout especially at the beginning. (:

Well, I’m off to listen to it again! Oft and watch it, nyaha! Enjoy! I reaaaalllyyy want to try this makeup range now! ♥ (I’m going to type this heart all the time now baha!)