Just an update, I may actually be changing my blog FROM mynihongoandhangul to something else. This may not happen but it is something I’m considering. I’ll be studying either Japanese or Korean in uni and one reason for this potential switch is because I’ll probably, well most likely, be focusing on one of these two countries more than the other due to the education and my year abroad and hopefully whatever comes afterwards.

I love both countries, however, I be end up with focusing on one all the time, and there’s no point in calling my blog mynihongoandhangul if I’m only living up to half of it!

This is simply a thought and may not even happen because I blog to help with two countries I love but I also do it for my own amusement. Half the amusement will go if I suddenly stop with one. 😥

BOOM! Just an update and just something I’m thinking about. ♥

So I’ve been attending Japanese/East Asian talks at different universities to find out which one is right for me and let me tell you IT’S WORTH IT. Teachers drill it into you (at least mine do) how important it is to look round every uni you’re considering  as a lot of the time you’ll be surprised, and they’re right. Uni’s might teach the same subjects but they are definitely taught differently. In my case I was looking for East Asian Studies specifically Japanese AND Korean because I have still yet to decide which I am really set on. I KEEP SWITCHING OKAY! And my personal statement must be done in a couple of weeks…bloody hell.

So my advice, if it wasn’t obvious enough, is to find out the open days of every uni you’re considering and attend.the.relevant.talks. This applies to all subjects, not only EAS, however, since I’m taking EAS I’m going to refer to it throughout this post now. I attended the talks of both Sheffield and Leeds and I’m going to compare them as an example.

Just to make sure before I start, this is my opinion completely, it isn’t a fact and I shouldn’t need to clarify this but of course, on the internet its necessary to avoid misinterpretations SO:

Uni of Sheffield – teaches both Japanese and Korean (both languages can be paired with other subjects) and the talk was a general EAS talk covering Japanese, Korean and Chinese. The head of the Japanese talk and the head of the Korean talk were present at the time of my talk and they were both fantastic! Yep, they had a power point but knew exactly how to ‘work’ it, not relying on it too much at all, they simply used it as a starter for each section and had no problem talking to us, the small group that was there. I believe H.Dobson is the name of the head of the Japanese department and he led the talk – he ran it beautifully, the presentation, the casual way he delivered the talk and the humor as well. It was all fantastic, great content, great answering of queries, great delivery. His co-presenter, the head of the Korean department also delivered her side of the talk very well. It wasn’t split into two parts, but rather they both delivered together which was really efficient. Sheffield sends their EAS students abroad in their 3rd year.

Not one part of this talk bored me and even afterwards they suggested, if people had more questions, that we talk outside as they talk had finished, however unfortunately I had to meet the friend I was with so I didn’t get the chance. They provided us with literature, info about the talk and email addresses for more questions which I made good use of – I enjoyed the talk so much that I even emailed them with my questions and had to mention that I wanted to sit in there all day and talk about the course. Sheffield sold it to me. Just brilliant.

Uni of Leeds – teaches only Japanese and Chinese for EA but again they can be paired with other subjects for dual honours. I have to admit, I was slightly more bored with this talk. It was specifically for Japanese, not any other language and it was run by a foreign European woman and a native Japanese woman. During the talk the European tutor basically read straight off the slide show, all the information was on there and I didn’t particularly find her delivery of the course very engaging. After which the native Japanese tutor explained her part but admitted most of it had been covered. I got the feeling that despite presenting this every year they probably hadn’t been prepared. I felt like Leeds was trying to sell itself a bit too obviously at this point due to the presentation of statistics and there was a lot of commenting on why they thought their system worked best. However I enjoyed myself quite a bit more when a 4th year student came in to talk to us, she was very social and engaging and we clarified a few questions everyone had with her which was very helpful.

It was mentioned that Leeds actually sends students to Japan in their 2nd year unlike a lot of universities who send their students in the 3rd year. This was was because they felt that students benefited a lot from the rapid expansion of vocab and speaking skills picked up abroad which made it easier for students to come back and finish their second half of uni in England. Apparently, it’s easier to work on future preparations and workloads when you do not have reverse culture shock to deal with which is completely true and well said.

I was expecting Leeds to have a really mind-blowing EAS talk but I admittedly I was a little disappointed. Overall, like I said before, I was in love with Sheffield the minute I stepped into that room. The way they presented was just fantastic and its definitely going to be my first choice no matter what whether I take Japanese or Korean.  So as demonstrated in this post, no talk is going to be the same in one uni as it will be in another! Make sure you do your research first! You do not want to be stuck in a uni you hate.

BOOM! Hope this post helped at least a little! And enjoy your open days!

Lots of times the ᄅ will be in the middle of a word and it will be pronounced closer to an l sound such as ‘molla’/’몰라’.

To make this ‘inbetween-not-a-tongue-rolling-r-but-not-a-full-on-l’ sound move the tip of your tongue back as if you were about to roll it to make the ‘flicky-rolling-tongue-r’ sound but don’t flick it, keep it there. Now try to say an l sound like ‘elllll’ or ‘ullll’. Try saying ‘molla’! Or ‘hullllll’!

You’ll see in a lot of kdramas that the placeent/shape of the mouth when Koreans pronounce the l sound is different to a westerners.

Sometimes its hard to distinguish but the placement of the tongue can make l sounds very different! Practice if its not easy for you, you’ll get the hang of it! BOOM! (:

What does ~ mean? Korean talk!

So I’d noticed that when I was speaking to my Korean friends I’d see this little symbol all the time added on to the end of a sentence! What the frig does it mean???

Now I’m going to add in a little conversation between me and my Korean friend to demonstrate because when I try to type the little symbol on here it ends up looking like a dash: ~ (as you can see!) (sometimes it looks like a dash sometimes it doesn’t, I checked earlier and it was a squiggle!!)

You’ll have to click it to be able to see better!

So as you can see, my friend was using the ~ (screw it just gonna type it anyway even if it fails!) after a short phrase and even repeated it multiple times like this: ~~~~~~~~

I asked my other Korean friend what it meant and low and behold he had an answer! Basically it’s just a way of expressing that you’re being friendly, cute, active or polite. I asked him how to use it and my friend replied with: 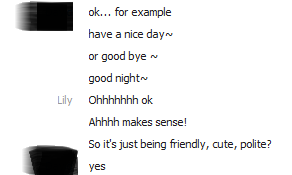 So its mainly attached to words or small phrases like ‘goodbye’ or ‘hello!’ or ‘thankyou!’ but I’ve seen it also used excessively with short words or mini expressions like ‘Ah’ E.g. ‘Ah~~~~~~~~~~~~~~~~’ like my friend did in the first picture. Using it like this is expressing activeness or enthusiasm or maybe as an exaggeration!

So today whilst chatting with my Japanese friend T I started questioning what anime actually is, what it’s defined as in both Japan and non-Japanese countries. He sent  me a link to this Japanese show which, to me, was a cartoon, but to him, was anime. He said; ‘I like this anime hehe’ and I was like ‘Is it animeeeeeeee….?…Really. Is it?!’

This is the anime he sent me: Episode 2 The Monster-making Machine

^ what I call a cartoon character

^ what I call an anime character

The short answer is that anime and cartoons both mean exactly the same thing.

The long answer is that they are different depending on whether you’re Japanese or Western/non-Japanese.

In the Western world cartoons have many different styles of being drawn but only Japanese cartoons have the distinctive features of ‘anime’. These are features such as the eyes, for example, which is one of the biggest give-aways. The general layout of the movements and the exclamation art that occurs when someone is maybe shouting/fighting or feeling a strong emotion. Anime has it own unique characteristics which, and along with the fact that it does not originate from the Western world but from Japan, is why it is referred to by another word other than ‘cartoon’. We know when something is a Western Cartoon and we know when something is a Japanese Cartoon. We simply use the term ‘anime’ to describe Japanese Cartoons. It’s literally just to distinguish between the two, it’s the same as if you’d say ‘Oh I was watching that German Cartoon the other night’ but instead of saying German you’ll have some word for it. If you say ‘oh I was watching that Japanese Cartoon the other night’ it’s the same as saying ‘oh I was watching that anime the other night’. We have a distinctive term for it so we use it.

Finally, ‘anime’  アニメ is literally just short for ‘animation’ which Japan refers to as any animation Western or Japanese or Korean or Chinese or any cartoon. Cartoons are anime in Japan, they’re the same thing, they’re animations therefore they are anime.

They have this shortened word which means exactly the same thing as cartoon does. To us all cartoons are cartoons, in Japan all animations are anime. There is only one thing that could possibly blow this whole explanation apart which is that in the Western world, yep, we do say cartoon for cartoons however, this seems to only apply to drawn cartoons. Things like Wallace&Gromit however are seen as animations. I’ve just tried to elaborate on this query but it’s made my brain go nuts trying to word it and I’m much too lazy to try and spend time doing so. Bum. OOOOOOOOH. I’ll leave you think on that but anyway sorry if I ruined this whole explanation for you with that HAHA! If you do have a definite answer or if you even just have a suggestion/idea please comment and let me know, I’d love to hear peeps’ thoughts!

P.S. I feel bad for starting this insane thinking cycle all over again, what does animation REALLY mean?!!! Let me put an end to the misery. Anime, for Westeners, is a Japanese Cartoon, any Japanese cartoon, and anime, for Japanese, is any animation at all. (: